Home » All Posts » Ben and Bieber 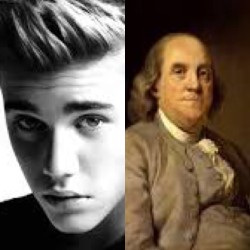 In this world nothing can be said to be certain, except death and taxes. –Uncle Ben

Allow me to practice making a Constitutional Amendment to this phrase (I’m running for President–did you know?), because aside from being overly cynical, it’s not exactly true. I know plenty of people who have avoided taxes for years–one or two who even went to the grave running from the IRS.

So if I were Phrase President, I’d change this famous quote (written by THE first and MY first University , UPenn (go Quakers) to,

Nothing can be said to be certain, except death and difficulties.

Not one of us (yet–I know some of you are cryogenic fans) is getting out of this alive and nobody lives a charmed life.

Alright, already, I hear the moaning and groaning out there, “No way! What about Beyoncé?”

Do you know Beyoncé? Beyonce had a miscarriage–did her wealth and fame inoculate her to pain? And do you know her personally? You may think you do–just as you may think you know your friend on Facebook with the “perfect” family who always takes, like, the most amazing selfies. But gimme a break, here–we all know this is fiction based upon the epidemic of “Greener Grass Syndrome”.

We present our worlds as we wish them to appear.

I’m not saying anything new here, I know–but it bears repeating. And it’s important to realize that Relativity is Real. One woman’s flat tire is another’s breast cancer diagnosis. No, the two are not objectively equivalent, but subjectively, yes–they are. And tomorrow the flat tire lady might find out her daughter has diabetes–or worse yet, has become a rabid fan of Justin Bieber and will henceforth request the constant airplay of said Boy Wonder.

I am going to bring Dan Fritz into this again because, well, he taught me so much and it helps to share these lessons. Dan endured a mammoth amount of chemotherapy during his year-long relationship (this is the word I decided just now to use–instead of “battle” or “fight”, which are gross and I hate them) with cancer. After a conversation with one of our pregnant friends who was having severe morning sickness he said, “That must be awful to feel sick constantly.” That was all; very simple. A guy getting blasted with chemicals so toxic some were dispensed from glass jars (they’d eat through the normally used plastic) still had the perspective to apply his empathy to another–to acknowledge and not dismiss the suffering of our friend.

All I’m saying is that no one escapes challenges, and the sooner all of us can fully embrace this concept, the sooner we’ll be on the high road to living compassionate lives…even if this includes a teensy bit of the Biebs.

Something Where There is Nothing