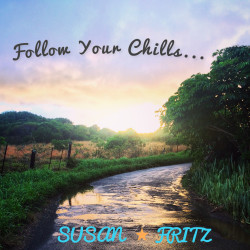 Unless you’ve also never heard of yoga, Lululemon, or Mythology itself, you’ve likely heard the bliss phrase, spoken by Joseph Campbell, famed scholar of comparative mythology and religion. Probably best known for The Power of Myth, Mr. Campbell made us Moderns think about the role of myths in our everyday lives–including the oft-cited “Hero’s Journey”. This is all good stuff, but taken at face value, the “Follow your bliss” instruction sounds “epic” and like a lot of pressure! I mean, sometimes I just want a grilled cheese for dinner. And maybe some tomato soup…does this count as “Bliss” in an Average Joe context or not? I feel so confused and wonder if I’m failing at life.

So instead of sliding down the slippery slope of inadequacy, I’ve decided to change the phrase to suit my need for a less pressure-filled existance. Because unlike an Olympic athlete or even a Mathlete, I don’t do well under certain kinds of pressure. I tend to shut down. I might look at Instagram for 30 mins instead.

So…(I’m getting there, I promise) when I got the chills after reading a heartfelt message from an old friend, it occurred to me that I was on the right track to, well, my work; my joy; my proto-Bliss. It’s what has led me to change the nature of my podcast into more of an exploration based on a combination of what’s important to me–what’s been on my mind–and what people ask me…

For example, just this week I received one message asking “What has been instrumental in helping you move forward in happiness after your loss..?” Another was asking for guidance after her father’s suicide. These questions, while not simple, are nevertheless easy for me to answer–in the sense of I answer them with ease. They come from someone’s heart; are filled with soul. It is an honor to be asked and a pleasure to answer.

All this leads back to the grilled cheese (doesn’t it always, though?).

Although it’s not a popular opinion; although I was taught the opposite by family, teachers, employers, and society, the thing I’ve come to value, to desire, and to (as oxymoronic as it reads) achieve, is a life of ease. And the way to procure ease is to let yourself off the hook for a second; to say, “enough is (good) enough”. Sometimes, even if you could make filet mignon–you just want a grilled cheese.

The bottom line is this, Mr. Joseph Campbell: I love your work, but I don’t necessarily aspire to it. You can keep your bliss. I’ll follow my chills to a place of ease.

*written entirely while walking the dog Boyfriend in the twilight. Haiku, HI

Something Where There is Nothing

Episode 9: Q Before A (On the Fritz Gets an Earlift)