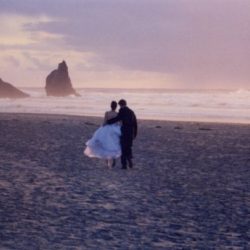 I was writing a note in my iPhone calendar yesterday–the simple one, normally reserved for “Dentist at 9”; “United flight 351 @ 4:21 PST”. I know you’re supposed to use some special app or else buck the system entirely with paper and pen, but I’ve been stuck in my ways since my Blackberry Days.

(I sat on that Tupperware-shade green chair and read to you from the tiny, slow-to-load Blackberry screen…transcripts of Beavis and Butthead in “young-eye script”; more serious NY Times articles—that spinning wheel the technological equivalent of a watermill.)

(You weren’t going anywhere yet–in this world or the next. 2008 was a bust, so we decided we’d celebrate next year at the Italian place in midtown—or Italy, why not?! Or…anyplace but here at the Hotel Sloan.)

Yesterday I didn’t make it to the store—I hate the store. “Hate” may be a strong word, so I’ll use “loathe” instead. But loathe is…I know, I know…

(Dancing through the “Ethnic foods” aisle…Amy Grant! Depeche Mode?! Guns ‘N Roses! Moves like no one was watching except for you. “Every toast has its burn…”)

I did what I do until ALL of the almond butter is gone—not a finger-as-spatula scrape left: I moved the date of my shopping list: October 22nd becomes October 23rd in the antiquated iPhone calendar.

(Fajita night is EVERY night! Vegetarian and meat-eater’s delight!)

(We crowded onto the Tupperware green Ikea couch—DVDs from the public library; The Sopranos…)

It would have taken 15 minutes on the BB Pearl…”Ivory or elephant: Traditional; Gold Jewelry: Modern…”; two-thousand-and-four…somewhere in-between…

Ivory, gold, elephants…you wouldn’t have gotten me any of those things.

(“When this is over, we’re going to take a nice long trip…”)

And the things which don’t exist.

Smoking or Non? _ Some of you remember these “se

As usual, with all due respect... #whenphotoopbeco

Here’s an idea💡 : instead of burning garbage

I am now back in Georgia 🇬🇪 (the country), b