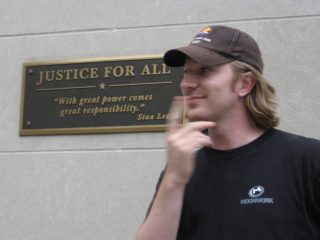 7 years ago, my late husband Dan had just turned 30.

7 years ago I would have been rolling blue party streamers around the edges of his bed at the Hotel Sloan in a “comedy-in-the-Chekhovian-sense” attempt to deliver a festive day. As I twirled around and then taped the last piece to the metal bed frame, Dan said something I will always remember but sometimes forget—especially when things are going well. I think that’s ok–to forget in the pre-frontal cortex or wherever the immediate brainstuff is held. It’s a sign of life moving forward in its merciful way. But once in a while it’s good to re-remember–to resurrect that “brainstuff” from its deep folds to the light.

And since I like to quote Dan, don’t stop me if you’ve heard this before.

On November 19th, 2008, I attempted the Usual Suspects of Jokes typical of a milestone birthday—the wonder of 3 decades on the planet. He felt awful that day—the cupcakes brought by a friend were really gifts for (to be eaten almost entirely by) me. Gifts in the form of objects, edible or not, were of no use to Dan. He, however, managed to offered this verbal gift. “Sometimes you’re lucky to turn 30”, he said, with the matter-of-fact profundity muster-able only by one left with everything to lose.

“…sometimes you’re lucky to get old.”

This week filled with the news from France combined with a lot of other things has made me want to go silent—the overload of emotion (good and bad–I’ve got a lot going on over here!) is immense. But whenever I feel this sense of overwhelm, I return to Dan’s words—the grace, the privilege, the “luck” of simply continuing to live. It is not lost on me…I hope it’s not lost on you so you can remember to remember to live your way through it–all of this Life thing, smiling and/or sometimes not. Over and sometimes Underwhelmed.

I write this from the outskirts of Tokyo–a place I never imagined I’d actually visit. My life surprises me at least as much as it does you. I’ll go back to Bali next week to spend a few more weeks there before going–somewhere else. I took, as I always do, the cheapest flight I could find but ended up having to check a bag and spending about the same as a “non-up front cheapskate” would. It reminded me of a phrase I’d written down in the ‘ol iPhone notes once–the kind of phrase which waits its turn. It seems relatable enough now as I metaphorically carry Dan with me everywhere I go.

The learning curve of life is sometimes steep, but love is baggage you don’t have to check.

Thank you, Dan, for continuing to travel with me. I hope you’re celebration is raucous where you are.

The Way of the Susan