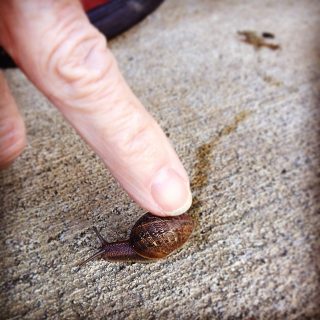 A couple of weeks before I knew where I was nomading next, I was in Oregon for a visit to my “mailing address” home and my mom and sister. I asked my mom a hard question. Not the make, model, or variety of “hard” where you know you’re about to get the answer you don’t want, but rather, its opposite. I knew she was going to say the right thing. And, although for the record the “right” thing could have been anything, if you know what I mean—and I think you do—I am referring to MY “right thing”—the one that would make my life not necessarily easier, but more forward-moving; more “me/mine/M-word-centric”.

I mustered up the unnecessary courage to spew the words ending with the hook-like punctuation mark in her direction, waiting for whatever it is I expected or didn’t expect.

“Ma…” I started (I reserve this motherly term instead of my usual “Liiinda!” for this type of “I crashed the Caravan” moment).

“I want to ask you a question, but only if you promise me the first time you answer (have you met a WASP from Passive-Aggressiveville lately?) to tell me the Absolute Truth.”

At this point I’m certain she knew I wasn’t going to ask her opinion of what color socks to wear— (I’d reject her answer anyway—us kids are perpetually 15-years-old), but I’m sure she also didn’t think I was going to say I was about to drop everything and join the cir—the—circus either, um, er, well…never mind. The gravitas in my tone-of-voice was Grande-with-room on the Starbucks Scale of Size.

“I am thinking about going someplace far away again…and originally I wanted to be here or come back no matter what for your birthday, but I wanted to know if you’d be crushed or not if I wasn’t here on the exact day—if we could celebrate when I am here?”

I likely followed this lengthy question with a slew of “Ums” and “Ers”, but ended it, again, with “TELL THE TRUTH” like she was 5-years-old and had been caught raiding the cookie jar—or using up the corn starch for a “green slime volcano experiment” she’d seen on Mr. Wizard…although who would do that?

And although it’s only a piece of Why, it’s a HUGE part of Why Linda, my mom, is so wonderful. Without skipping a beat, she replied,

“Of course it’s ok. I’m not wild about the idea of turning 70 anyway…you could just be here when I turn 71 to make sure I made it.”

The facts, ma’am, boil down to an important one: I’m very lucky.

Whoever up/down/over/under “there” decides which person you get for a mom, I hit the literal and proverbial jackpot (for reals…she hands me free drinks and gold coins when I’m out of cash—ok, not really).

My mom taught kindergarten for longer than I care to imagine (more than 5 minutes but less than 25 years) and is therefore qualified not only as a parent, but also as an observer/educator of countless young minds (I would count, but I spent time in various coat rooms at Meadowlark Elementary subtracting 3-digit numbers on my fingers…so I’m not reliable–I didn’t know there were columns, alright?!). I had the opportunity to observe her in her element where she practiced what I viewed at the time as a hilarious version of “tough love”…hilarious because I could see through the tough exterior all the way to a core which was pure love. She cared enough to hold her kids to certain expectations—because she knew they could do it, if given half a chance. She was “tough” on them, but at the end of the school day, the ones she was hardest on came up to her and gave her the biggest, most bearest of hugs imaginable. They loved their Ms. Myhr.

It couldn’t have been near even a farm team’s ballpark of “easy” to do what she did: go back to teaching after getting divorced when I was 5 and my sister was 7—raising two girls at an age where, and I’ll speak for myself here, I imagined myself to be the center of Everything. After all, Kid Grief exists in a vacuum when the parent is doing his or her job right. But she did it, and we turned out (don’t laugh…) alright, and I did say so myself.

There is so much I want to write about Linda—and so much exists—I mean, she’s OLD for crying out loud! SEVENTY??? Hello??? But seriously (that was also serious, but moving on…), I want people to read this and if it’s too long, they will skip to the next item on their newsfeed with the word “obsessed” in it.

(Alert: this is the paragraph where I appear to turn on a dime).

One of my favorite experiences back in my acting days was attending the Moscow Art Threatre School USA Stanislavski Summer School (the name was as simple as the program). It was held in Cambridge, Mass, the place where people “paaak their caaas” and stuff. We paaaked ourselves there for an intense summer of movement (AKA “torture”) classes, Chekhov scene study classes, and final presentations masterminded by hard-core Russian professionals. I’m getting there…

Like every program where bonding with the group is, like, sort of essential to the success of the entire deal, all of us young people were assigned the task of getting up and telling a story about ourselves we thought would most efficiently answer the question, “Who are you?” At least I think this was the question—I am not famous for my success with standardized tests or following directions, so all I really recall is my “answer” and the story I told. It was about the star tattoo on my hand.

Ahem…about a month before I was slated to go across the country to attend the University of Pennsylvania, I got it into my head that I needed a tattoo, the only thing my mom made me proooomise never to do (murder was fine; tattoos a no). At the time I’d been listening to a lot of Ani Difranco, this Girl Rock kinda indie musician chick who had a lot of cool tattoos—including ones on her fingers. Now keep in mind these were the days before every teenage girl had full-on sleeves and their mom took them to the appointment, so getting even one tattoo was still a big deal…let alone on one’s finger. Long story longer, I drove by myself the 3 hours (I was probably doing 90 at least part of the way) to the coolest town any of us knew: Missoula! Where proto-hipsters were hippies and cowboys wrestled cattle with hemp lassos! Since there were really none established, it’s like I decided I needed my own personal Rite of Passage in the form of body art. And as I walked up to the tattoo artist fella at Altered Skin, he said (he didn’t quite, but the following sounds better):

“What’ll it be—tribal? Cartoon? Are you one a them Daisy Duck types?”

I stuck out my right hand and said, probably gulping down the lump in my throat,

“I’d like a squiggly line on my finger, sir.”

I stood there for a minute, feeling silly—half wishing to back out, half wanting to stand firm. After a few moments, I did neither.

“Well, what about a star right here…?” I pointed to the soft space between my right thumb and pointer finger. “I love stars.”

I’m not sure what, if anything, Mr. NP said after that, but I do know, as I look down at my right hand typing these words, there it is, plain as day: a nickel-sized 5-pointed black outline of a star. I press on it sometimes when I’m stressed to remind myself to calm down—that I’m still here; that time passes. I do know it cost $20 dollars and didn’t really hurt (there’s nothing much under than fleshy part of the hand). Kids ask if it’s drawn on (I used to tell them yes, but now they see tattoos all the time so I’m no longer the bad influence I once was). Adults ask if it’s my only tattoo (yes) and “what it means.” Unless they have 30 minutes to listen, I tell them in the way one does when the Truth takes too long

Longer story longer-er…I drove the 3 hours back home the same day, told my mom I had fun going to my favorite eclectic store, Rock ‘N Rudy’s and probably went to bed…and then the guilt set in. You see, the plan I’d devised would have been surprisingly easy to pull off: hide the tattoo from my mom for one more week; put my hand in my pocket—use my left hand—I’m left handed anyway; tell her I’d drawn it on (this was a woman who still falls for “Did you know gullible isn’t in the dictionary?”). I was home free for at least 6 months or until the next time I saw her. But as I tried to sleep, that guilt, it intensified…and by the time I woke up, I was in tears. I couldn’t lie to my mom about this! I headed downstairs, sobbing, and spoke to her much in the manner I asked if it was ok for me to be away on her birthday minus the certainty of her reaction.

“Mom, I have to tell you something.”

She looked nervous in that “Is she pregnant? parental way (but there was, literally, no way).

And then I presented my right hand, still wrapped in protective plastic wrap.

She started to laugh.

“Oh, Duz…” (one of my nicknames, short for Duzenberg, which came from…where do nicknames ever come from?) “If that’s the worst thing you ever do, I’m pretty lucky.”

And, well, it wasn’t–it wouldn’t be, but at that point in time, that was that. You could accuse me for using my tears a a manipulation if I hadn’t been so sincere in my regret; if I hadn’t worried what she’d think.

And that’s the story I told to the Russians and the room full of acting strangers—probably with even more words, and pauses, and confused looks for those waiting (they also had to wait, just like you) for the punch line.

“I am who I am today because I couldn’t lie to my mom”.

As much as she’d squirm and squeal and resist me on this, Linda, my mom, inspires me to be better—and how she does this is so simple it’s often missed by the world’s supposed Parental Authorities and Greatest Minds.

She loves me and she is interested in who I am. Period.

Now that’s a lady you line up to know.

I’m lucky to have known her my whole life.

The Way of the Susan